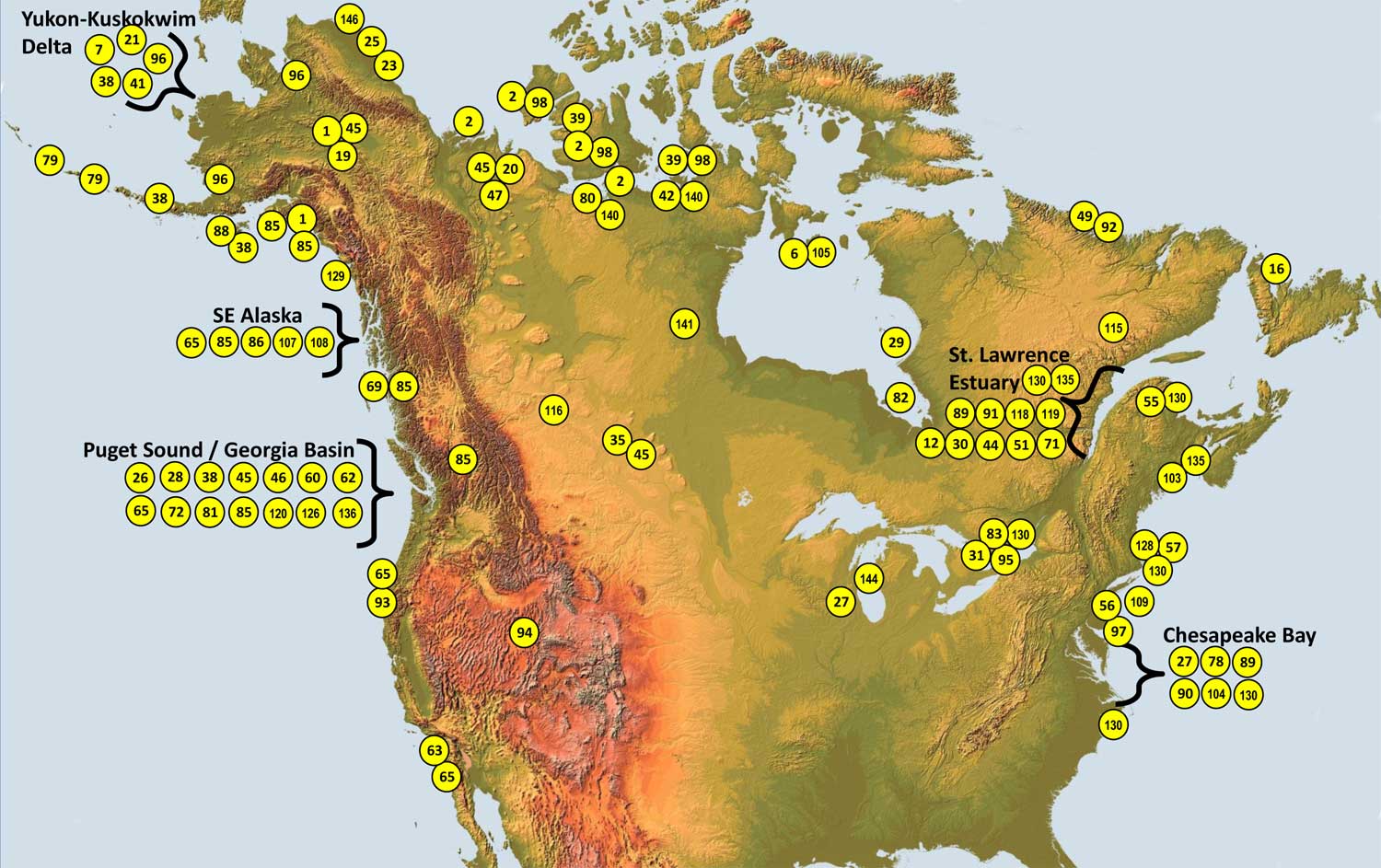 The following sea duck projects have been officially endorsed and/or funded by the Sea Duck Joint Venture. Most studies have been completed; a few are ongoing. To view the most recent annual project report, or final report for these projects, click on the Project Number.

No. 2(A) Identification of Beaufort Sea Migration Corridor for Sea Ducks

No. 2(B) Identification of Beaufort Sea Migration Cooridor for Sea Ducks

No. 3 Population Demography of Surf Scoters Wintering in the Strait of Georgia, British Columbia

No. 4 Movements, Habitat Use, and Feeding Ecology of sea ducks in the Atlantic Flyway..

No. 5 Local survival and patterns of philopatry for Harlequin Ducks wintering in outer Jericho Bay, Maine.

No. 6 Identifying migration routes and wintering areas of common and king eiders breeding in Nunavut, Canada and Greenland.

No. 7 Ecology of breeding Long-tailed Ducks on the Yukon-Kuskokwim Delta, Alaska.

No. 9 Viruses in long-tailed ducks (Clangula hyemalis) molting in the Beaufort Sea

No.10 Breeding habitat of Barrow’s Goldeneye in Eastern Canada

No. 11 Long-term Population Study of Harlequin Ducks in British Columbia

No. 12 Coastal molting locations of scoters and eiders in eastern North America

No. 13 Contaminants in surf scoters wintering in the Strait of Georgia, British Columbia, Canada.

No. 14 Survival and recruitment of Common Eiders (Somateria mollissima dresseri) in the Gulf of Maine.

No. 15 Evaluating Effects of the Shellfish Industry on Scoter Populations in Coastal British Columbia

No. 20 Breeding Ecology of Scoters nesting in the Lower Mackenzie River Watershed, NWT

No. 21 Spatial and temporal patterns of movement by male Black Scoters on the Yukon-Kuskokwim Delta, Alaska. (conducted in conjunction with study on black scoter breeding ecology)

No. 24: Importance of the Alaskan Beaufort Sea to King Eiders

No. 25: Breeding biology and habitat use of King Eiders on the Coastal Plain of Northern Alaska

No. 28 Determination of breeding areas, migration routes, and local movements associated with surf and white-winged scoters wintering in the inner marine waters of Washington State.

No. 30 Survival of the St. Lawrence estuary common eiders.

No. 31 Migration and condition of long-tailed duck wintering in eastern Canada.

No. 34 Effects of nutrients on the physiology, energetics, and behavior of captive sea ducks relative to sea duck feeding ecology in Chesapeake Bay.

No. 36 Duckling survival, habitat use, and incubation rates in common goldeneyes (Bucephala clangula) in the Chena River State Recreation Area.

No. 37 Food resources available to sea ducks on migration at the Restigouche River in New Brunswick, Canada and potential contaminant problems.

No. 38 Assessment of the Pacific Black Scoter Population: Population Size, Distribution, and Links among Populations: An Integrated Approach

No. 39 Surveys of King Eiders, Long-tailed Ducks and Other Migratory Birds in the Central and Western Canadian Arctic

No. 40 Winter population delineation of white-winged and black scoters along the Pacific Coast using genetic techniques

No. 41 Survival and reproduction of Pacific common eiders on the Yukon-Kuskokwim Delta, Alaska

No. 42 Comparative Reproductive Strategies Between Long-tailed Ducks and King Eiders at Karrak Lake, Nunavut: use of energy reserves during the nesting season

No. 43 Factors involved in population dynamics and delineation of North American mergansers

No. 44 Winter habitat use and selection of the Barrow’s goldeneye eastern population along the St. Lawrence River estuary, Quebec, Canada

No. 45 Tracing Sources of Nutrients and Energy for Clutch Formation by White-winged Scoters

No. 47 Cross-Seasonal Resource Use and Selenium Levels in Boreal Breeding White-winged Scoters

No. 49 Determination of species composition, numbers and moult chronology of Scoters along the Labrador Coast

No. 51 Post-breeding ecology of Red-breasted Mergansers in a marine environment

No. 54 Monitoring sea duck numbers and distribution in relation to existing and proposed aquaculture sites in Atlantic Canada and reducing interactions between the Aquaculture Industry and sea ducks

No. 56 Evaluation of methods for estimating population abundance and mapping distribution of wintering scoters and other sea birds

No. 57 Estimating Distribution and Abundance of Wintering Sea Ducks in Nantucket Sound

No. 60 GIS Analysis of Habitat Use by Surf Scoters and White-winged Scoters

No. 62 The Value of Herring Spawn vs. Alternative Prey to Surf Scoters (SUSC) and White-winged Scoters (WWSC) in the Puget Sound-Georgia Basin (PSGB)

No. 63 Population delineation, winter/spring habitat use, migration ecology and harvest of Surf Scoters (Melanitta perspicillata) from the southern portion of their winter range

No. 65 Spring Migration of Surf Scoters Along the Pacific Coast: Important Habitats and Energetic Implications

No. 70 Timing and Location of Acquisition of Nutrients and Energy for Clutch Formation by Black Scoters

No. 71 Ecological and behavioural monitoring of American Common Eiders during the annual cycle

No. 72 Seasonal Habitat Requirements of Surf and White-winged Scoters in Puget Sound

No. 79 Temporal and Geographic Distribution of the Aleutian Islands Pacific Common Eider: Rat and Andreanof Islands and Near Islands

No. 80 Surveys of Common Eiders and Other Migratory Birds in the Bathurst Inlet area of Nunavut.

No. 85 Annual cycle connectivity, inter- and intra-annual site fidelity, and habitat use of Pacific Barrow’s Goldeneye

No. 86 Distributions of Sea Ducks in Southeast Alaska: Geographic Patterns and Relationships to Coastal Habitats

No. 87 Molt ecology of White-winged Scoters in the St. Lawrence estuary

No. 89 Foraging values of Mulinia lateralis and Ischadium recurvum: the impacts on surf scoters wintering in the Chesapeake Bay

No. 90 Effects of Implanted Transmitters with Percutaneous Antennae on Breeding and Foraging Behavior of Captive Sea Ducks Used as Surrogates for Wild Sea ducks

No. 91 Movements of Common eiders breeding along the north shore of the gulf of St. Lawrence: Relationships between breeding, molting and wintering sites

No. 92 Diet of Surf Scoters Molting in Eastern North America

No. 93 Spring Body Condition and Breeding Propensity of Surf Scoters along the Pacific Coast

No. 105 Examining the Impact of Avian Cholera on the Population Dynamics of a Long-lived Sea Duck, the Northern Eider

No. 107 Molting ecology of Surf and White-winged Scoters in Southeast Alaska

No. 108 Population delineation and wintering ecology of Surf Scoters in Southeast Alaska

No. 110 Sea duck abundance, habitat associations and productivity in the Hudson Bay Lowland

No. 115 Developmental Surveys for Breeding Scoters in Eastern North America

No. 116 Ecology and Population Affiliations of Molting and Fall Staging Barrow’s Goldeneye at Cardinal Lake, Alberta

No. 117 Population Delineation, Migratory Connectivity and Habitat Use of Atlantic Scoters: Black Scoters

No. 120 Energetics and vulnerability to human impacts of molting Surf and White-winged Scoters in the Puget Sound-Georgia Basin

No. 121 Spatial and temporal distributions of wintering sea ducks on the Atlantic coast of the United States and Canada: population trends and relation to habitat

No. 128 Effects of gavage feeding and Extended Post-operative Care on Sea Ducks after Implantation of Satellite Transmitters

No. 131 Compilation and Archival of Sea Duck Satellite Telemetry Data

No. 134 Sea Duck Research and Monitoring in the Atlantic Flyway: Development of a monitoring program for the American Common Eider. Part II: Assessing the use High Resolution Imagery for counting males

No. 135 Sea Duck Research and Monitoring in the Atlantic Flyway: Development of a monitoring program for the American Common Eider. An assessment of repeatability and accuracy of aerial counts of males

No. 138 Publication of “Ecology and Conservation of North American Sea Ducks” CRC Press 2015

No. 139 Assessment of Harvest Potential of 5 Species of Sea Ducks

No. 142 Genetic characterization of Barrow’s goldeneyes in western North America

No. 143 Annual cycle connectivity, site fidelity, and habitat use of Pacific Surf, White-winged, and Black Scoters

No. 144 Migration patterns, habitat use, and harvest characteristics of long-tailed ducks wintering on Lake Michigan

No. 145 Wing tissue collection for sea ducks for stable isotope and genetic analyses

No. 148 Measuring pentosidinne in skin biopsies to reliably age scoters

No. 150 Using genetics to determine the breeding areas of Common Eiders harvested in the Atlantic Flyway

No. 151 Support for review of Waterfowl Breeding Population and Habitat Survey

No. 153 Population monitoring and information needs for management and conservation of sea ducks on the Great Lakes

No. 161 Monitoring of Non-Breeding Sea Ducks on the Great Lakes

No. 162 Identifying Demographic Bottlenecks and Habitat Use to Support the Recovery and Management of American Common Eider: A Range-wide, Full Life-cycle Telemetry Project

No. 164 Assessing Hunting Pressure on Common Eiders in Chukotka, Russia